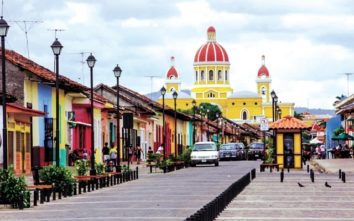 Here is a list of instructions on how to get from Managua to Granada.

The best way to get from the airport to Granada is by bus from the UCA bus terminal. Expect the trip to take about 2 hours in total and cost as little as US$5.

We assume that you are just arriving at the airport in Managua. If you’re already in Managua, you can jump to the instructions below starting at “Catching the Bus From UCA Station.”

Getting to Granada from Managua is very easy and quick and can be done during daylight hours. If you are traveling at night, you’ll need to book a private shuttle service. If you have arrived in Managua late in the afternoon or evening you should consider spending the night in Managua and catching a bus to Granada the next day.

Getting from the Managua International Airport to the UCA Bus Terminal

Clearing customs in Managua and getting your vacation started asap is obviously you’re first priority.

This leg of your trip to Granada has the potential to be the most expensive. You should make sure you balance the need to get to Granada quickly with the cost.

There are a few choices to get from the airport to the bus station. The most obvious option is by airport taxi. There will be many drivers offering their services inside of the airport. The cost will be US$15 to US$20 to get from to the station. Prices are often inflated in the beginning, so expect to bargain to get the price down to a reasonable amount. If you can’t get the price down enough, find another driver or another more economical option.

A cheaper option is to go to the street that runs in front of the airport (Carretera Norte), and catch a regular taxi to UCA. (It’s pronounced ‘oo-ka’). You should expect to pay around US$3 for the ride. The trip takes about 20 minutes.

Make sure that the taxi looks clean and has red and white colored license plates. If you don’t get a good feeling from the driver, then simply find another taxi. It’s not worth the possibility of trouble. We always recommend that our guests negotiate the price before they even consider getting into the car.

The most economical option, is to catch a local transit bus. You’ll need to be able to speak a bit of Spanish to make sure you get on the right bus as you need to make one connection in order to reach MetroCentro. From MetroCentro, you’ll walk about 5 minutes to the UCA terminal. In total, you should expect to take about an hour to get to the terminal by bus from the airport, so this isn’t the best option if you want to get to Granada quickly. The cost is only about US$0.30 for the trip from the airport, so there is no cheaper option than this.

Catching the Bus From UCA

The buses to Granada are generally micro-buses, which seat up to 16 people, but will often be filled beyond normal capacity. This is important because if you’re carrying luggage or big backpacks, you may want to consider asking the driver to store them on top of the bus. Generally, they charge a bit extra to store things on top, but it is well worth it if you want the space.

Keep in mind that you’ll be paying for the trip directly to driver (or his assistant). Almost every bus will have a young kid, or two, that will be collecting the fare from all of the passengers, stuffing people onto an already overstuffed bus and helping elderly people with their bags.

Arriving at The Bus Station in Granada

After an hour on a packed bus, you’ll be happy to arrive at the bus station in Granada.

Granada is a small city. It’s built in the Spanish colonial style with the central square is the heart of the city. For that reason, your hostel is located no more than a few minutes from the bus station.

Where to Stay in Managua

We may not be completely impartial, but we think Managua Backpackers Inn is the best option in Managua. The hostel is centrally located and offers dormitories and private rooms. Services include Free WiFi, swimming pool, shared kitchen.

Having said that, many other options exist in Managua for everything from hotels, hostels, Airbnbs.  We recommend taking a look on Hostelworld.com, Booking.com or airbnb in order to find a location that suits your needs.

Where to Stay in Granada

If you’re looking for a hostel in Granada, we recommend the Oasis Backpackers Hostel. It’s located near the central park and is reasonably priced with dormitories and private rooms available. They also offer a nice swimming pool to cool off in. You’ll appreciate this after a day of wandering around Granada.

Nicaragua is very safe, in general, however you should take extra precautions while you are in transportation hubs and other crowded areas. Keep a close eye on your personal items, i.e. cameras, smartphones, wallets, purses, backpacks. Using a money belt is always a great option if you plan to use local transport.

About the Nicaraguan Currency (C$/Cordoba)

Note: At the time of publishing this article, the local currency (Nicaraguan Cordoba) was valued at 34 Cordobas to US$1. The prices are listed in US$ in this post. It’s best to pay the exact fare in Cordobas. This is because the driver won’t have change for a ten or twenty US dollar bill.

This site uses Akismet to reduce spam. Learn how your comment data is processed.